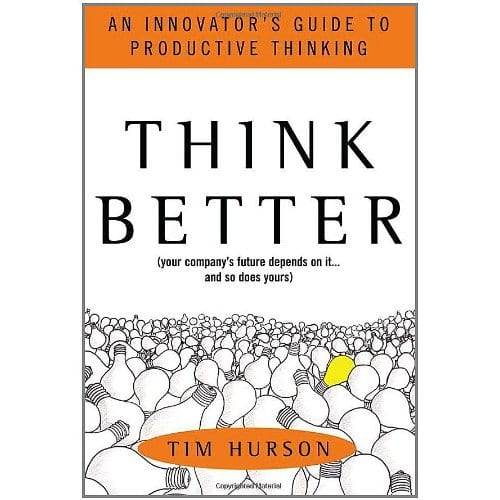 I have enjoyed reading many creative thinking and innovation titles over the years so it was with some anticipation that I read through the 2nd edition of Tim Hurson’s Think Better: An Innovator’s Guide to Productive Thinking.  I applied it to a business problem I was facing as I read through it and I found it both practical and effective. (I solved my problem)

The book comes in four parts:

So we cover the span of creative thinking from A-Z.  A lot has been written about creative thinking and what I think this title does well is spend just enough time in each area to be useful and not so much time that it becomes academic.  In fact, I found it marvelously practical and actionable all the way through.  It provides just the tools needed to break the inertia of doing what has always been done.

Think Better contains many interesting and insightful facts about the human process of creative thinking.  One of those insights being the idea of “The Third Third” which is the last and valuable set of ideas that come after you get your initial (and most obvious) ideas out of your head.

Tim introduces something he calls the Productive Thinking Method which is a six step approach:

Within this framework I found a number of valuable workshop tools that help identify and introduce change that is both innovative and practical and then shows how to make that change a reality and sustainable.  It’s flexible enough to be applied to any business and any problem.

In short, I loved this book because it was instantly practical to me.  By the end of the book (because I work with executive teams) I saw it as a complete recipe to helping both clients and ourselves solve sticky problems.  Innovation is the only true way to create sustained value and Thinking Better gets right to the heart of how to uncover ideas that innovate and then implement them.  I recommend it for anyone (individual or business) looking for a way to breakout and elucidate the creative thinking with themselves or their teams.

Think Better: An Innovator’s Guide to Productive Thinking is available on Amazon HERE.

Tim teaches productive thinking in business schools throughout the US, Canada, Chile, and Australia. He is a founder of Mindcamp, which holds annual educational events in Canada, Chile, and the US that feature the best creativity leaders world-wide. He has keynoted in 40 countries to global corporations, governments, and start-ups.

His book, Think Better, is available in ten languages and was recently included in McGraw-Hill’s “Business Classics” series. In 2015 his book, Never Be Closing, was selected by the Oprah Winfrey Network as one the year’s 15 best self-improvement books.

He is currently in the post production phases of an online course called Creative Intelligence: Think Better to Do Better, based on the principle that the key to doing better in almost any human endeavor—business, professional, or personal—is the application of straightforward thinking tools that anyone can master.